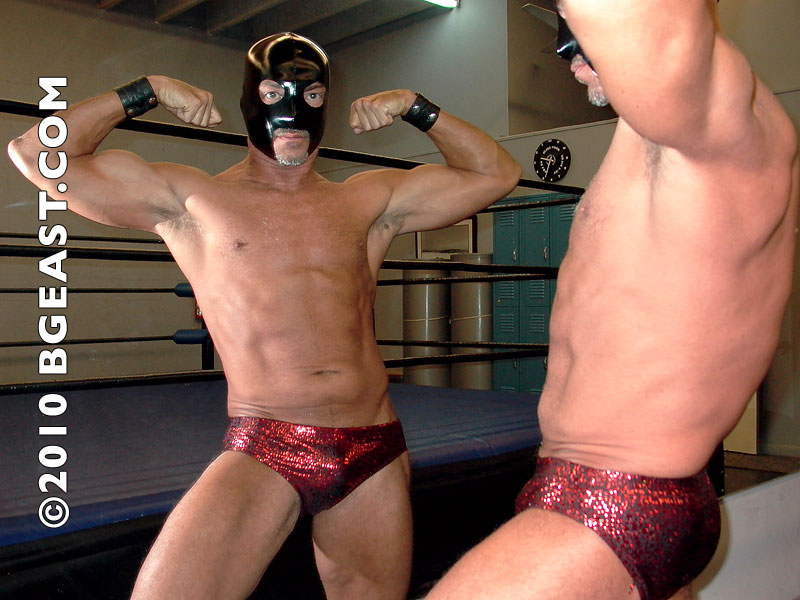 I ain’t gonna lie–I love guys that are bigger than me. I don’t know what that’s about (and to be fair–I also find guys my size or smaller hot, too), but I’ve always been drawn to big guys. I guess I’ve always had a fantasy about someone taking control of me, dominating me, and fucking me senseless. 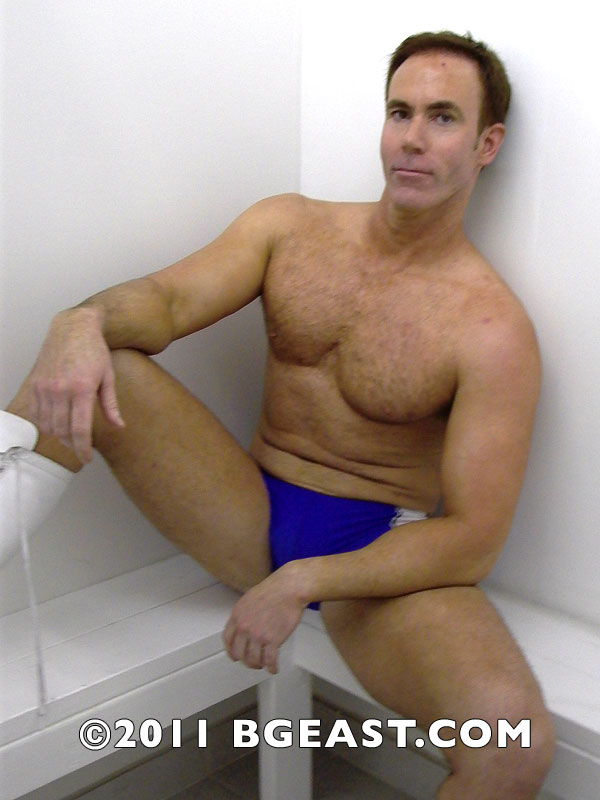 Drew Russell is one sexy dude, and he was a lot bigger than me. 6’4 and about 220 pounds to my 5’11 185 pounds. But having already wrestled him in the tag match, I knew our one-on-one rematch would be a beat down. Big time. I also got to wear this outfit:

I was in pretty good shape at the time, too.

The thing about wrestling someone with that much size on you is…well, you have to be aggressive. You have to take the fight to them, and never give them a chance to let them use their size against you. Because if you let them, you’re done…and once they’ve got you down, you might not ever come back.

So, I may have took him by surprise a little bit. But hey, if you’re not prepared for everything, that’s on you. 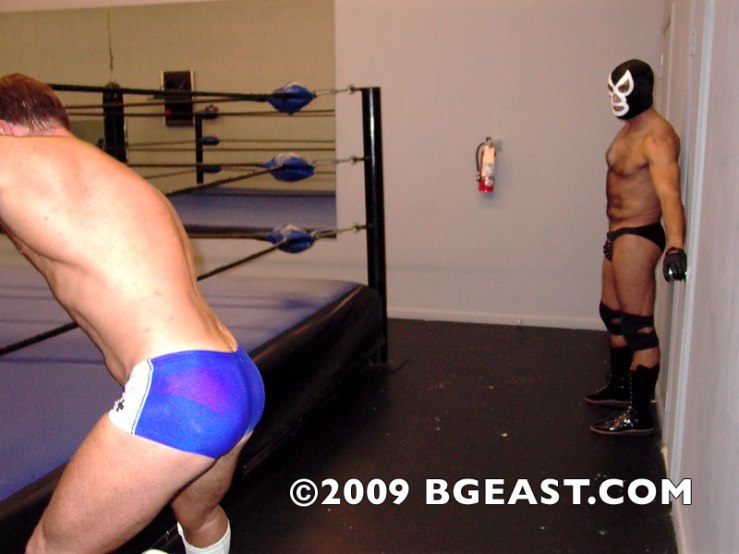 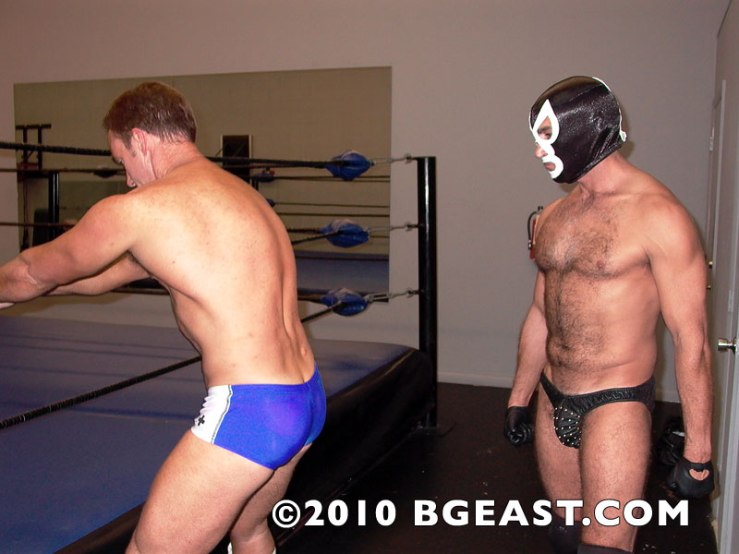 Seriously, expect anything and everything.

And once I had the upper hand on him…with a couple of exceptions, I never let it go.

I also took those stupid blue squares off him–he looked better in the pink bikini anyway–and choked him with him. 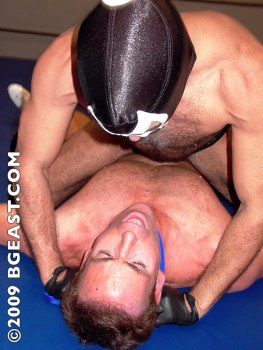 It was hot. Someone had done that to me in a private match–taken my trunks off, rubbed them all over my face, and then choked me with them, and it was so amazingly hot, and dominating. Having your own ball sweat rubbed on your face is a lot more humiliating than having you foe rub his crotch on your face. Choking him with his own trunks turned me on, to be honest…his body was already turning me on…and while the match wasn’t supposed to have any erotic elements in it..I couldn’t help exploring his body a bit with my hands when I got the chance. I sucked a bit on his nipples a couple of times. 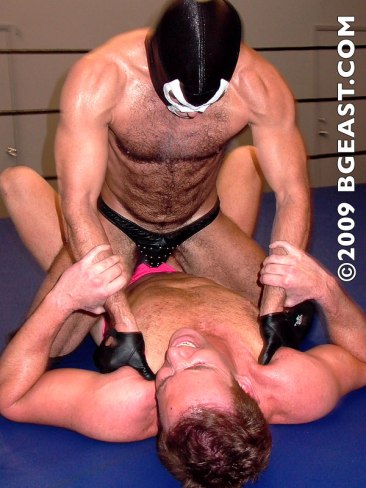 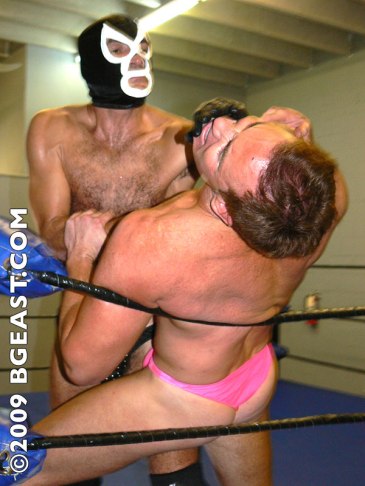 His pecs were a great target.

He did get me into a head scissors at one point, clamping those thick thighs around my head and making me smell the man-musk of his sweaty crotch. It was fine…I like being head scissored; it’s a big turn on for me. 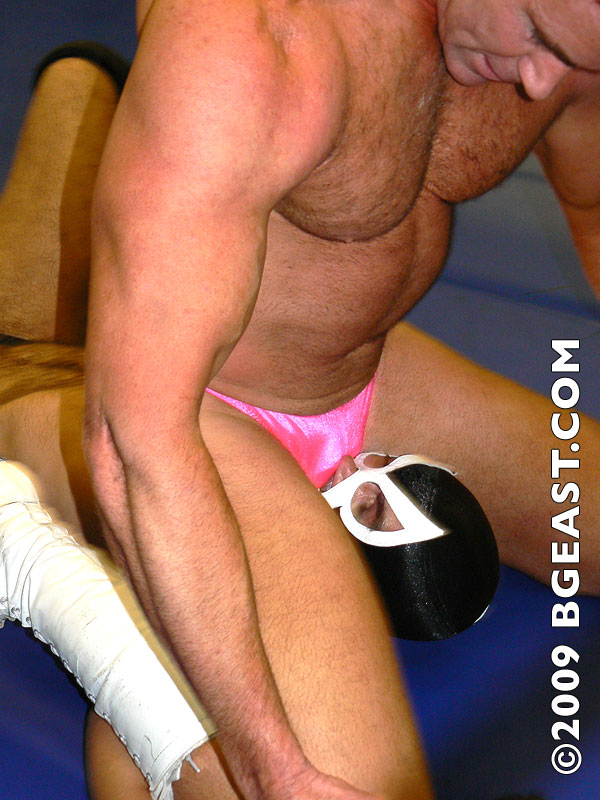 Turn about, though, is fair play. 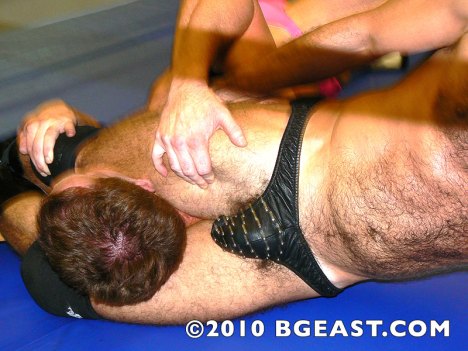 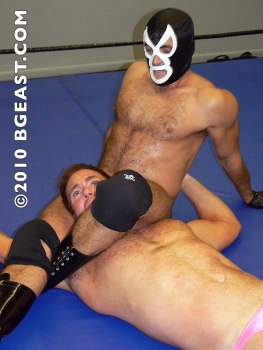 He also got me into a brutal bear hug later–but I like being bear hugged. Again, know your opponent if you want to beat him, and don’t apply holds he enjoys being in. 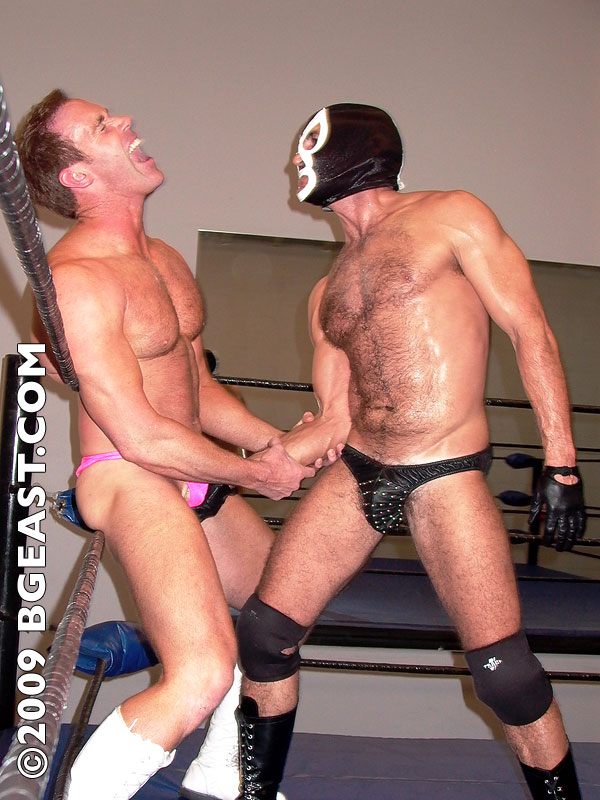 Drew was a hot guy. He got put through the ringer–besides me and the tag match, he also  got in the ring with Cole Cassidy. Maybe that’s why he didn’t do more matches for BGEast.

The above match is on Jobberpalooza 10, if you want to see how it all played out.